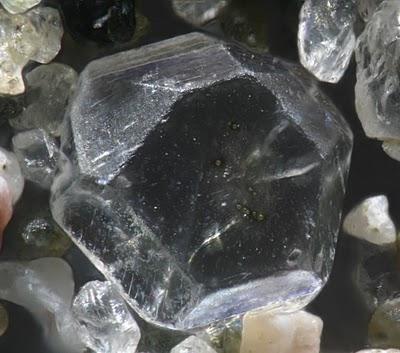 Sand, from a Japanese beach, greatly magnified -- a sapphire crystal.
This image is from Gary Greenberg's remarkable book, A Grain of Sand.

As mentioned previously, I am off on an extended jaunt, and that is why DTBA is a bit sparse these days. Sorry for that, but one cannot spend all of one's time sitting in front of the computer. Hogwarts is out for summer holiday.

Specifically, I am off hunting minerals, which is something I have learned to enjoy, and this may help to explain the theme of today's post: a brief rumination on an exhausting subject. Actually, I was also inspired by Malcolm Smith's comments to last week's Malas: Tibetan Prayer Beads post -- done about the same time I kicked over a boulder and found this strange little universe: 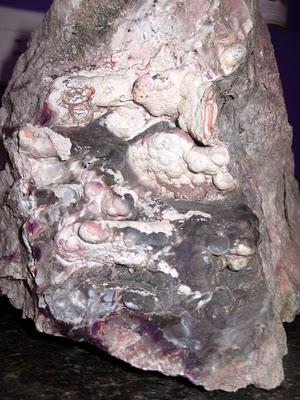 The gems of humans emit white, yellow, red, blue, and green light and have seven qualities. Their color purifies; they dispel the antagonistic effects of poisons, spirits, darkness, and swelling; they relieve the suffering of fevers, and they fulfill wishes.

Divine gems share these seven qualities and also are incapable of loss, are lightweight, are perfectly pure, and have the ability to speak.

That is from memory... but, for the life of me, I can't remember the source. When you remember the text but forget the source, it is as if you have forgotten everything. 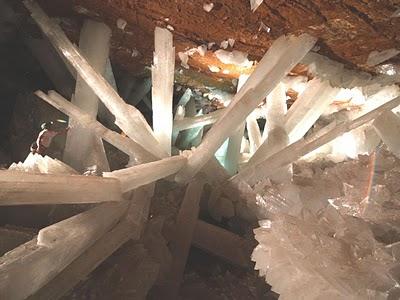 See the man at the left of the picture? This is not a trick photograph.

Closer to hand, we have Desi Sangye Gyatso Rinpoche's Mirror of Beryl, with the following, provocative passage:

"In the tantra it says, 'With gems there is nothing that cannot be dispelled.' They are the best remedy for the 404 kinds of illness, especially dual and complex disorders such as poisoning. They lengthen life and restore youth. Merely by wearing them on the body, you are protected from violent storms, hail, and weapons, and from the eight types of spirits. When made use of they close the door to birth in the lower realms."

This passage can be a little bit misleading -- you can take it to refer to gems, or you can take it to refer to gem pills, rinchen rilbu -- and we will come back to this in a moment. Meanwhile, we now have the door open to discuss gem medicines -- which in the context of Tibetan traditional medicine are associated with the potency of that which is precious (inclusive of precious metals in refined form), and also having a certain indirect overlap into that which possesses the potency of stones, and of earth.

A substantial portion of Tibetan traditional medicine is based upon Ayurvedic medicine. I think we all understand this. Ayurvedic medicine, in turn, makes use of gems as healing substances, based in part on their astrological characteristics, but more narrowly based on their color, or quite specifically, the wavelength of emitted light -- a building block, as it were, of the ancient science of healing by chemiluminescence, or so it seems to me. Nevertheless, the gems used in Ayurveda are nine, corresponding to the seven planets, plus Rahu and Ketu, and these are:

This, I hasten to clarify, is the strict Ayurvedic enumeration as laid out in the received literature. According to the Sushruta Samhita, "They are possessed of sacred prophylactic virtues, and  bring good luck to men who wear them, and cleanse their wearers from all impurities." The Tibetans whack the subject up a bit differently, but not by much.

Now, associated with each of these is an absolutely enormous body of myth, folklore, and superstition, sufficient to bore one to tears. I know this, because I have cried over this subject for more than fifty years, having been attracted to the study as a child. 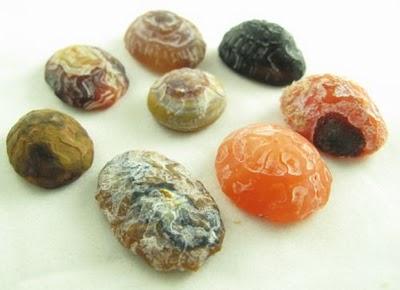 Just as an example, the "pearls" in the above list are not necessarily the aquatic pearls with which we are familiar. Rather, they are a bewildering variety of mutig, or bezoars, inclusive of "pearls" found in plants, snake's heads, and so forth. The ancient Arabs believed the very best kind to come from the heart of a deer that had been fed on poisonous snakes. In the photograph above, you see purported "red cobra pearls." There are firms in Indonesia that specialize in such things, if you are interested, but I cannot promise that the snake "pearls" (sometimes costing thousands of dollars) will be devoid of all oils.

Being merciful by nature, I will spare you all the rest of the tedium, and "cut to the chase," as they say in the motion picture industry.

The gems mentioned are either worn, burned to ash, tinctured, or crushed and combined with other substances, then made into pills. If worn, they are worn on specific fingers, set in specific metals. Burning to ash is done to remove toxic properties, and to enable ingestion by mouth. Tincturing is done by soaking the gem in various liquids for various periods of time. Crushing and combining with other substances forms the basis of the Tibetan rinchen rilbu, mentioned above.

These rinchen rilbu, or "precious pills" are thought by most Tibetan doctors to originate with Nagarjuna, although their introduction to Tibet is usually credited to Padmasambhava -- a sort of fusion between vedic medicine and siddha medicine. If you want to chew around on that, you can read Michael Lee Walter's 1980 Indiana University doctoral thesis, The Role of Alchemy and Medicine In Indo-Tibetan Tantrism, which is noteworthy for a Hogwarts-style translation of Jigme Lingpa ("The Essence of the Vessel, an Elixir which obtains for One the Life of a Magician.") You can find this little beauty on line, by clicking here, but don't everybody click at once and crash the server.

Getting back to Desi Rinpoche, we find that by the time of the Fifth Dalai Lama, gem medicines had deteriorated into a base practice:

"Many past nobles and high lamas ... tried to make gem pills. However, they only used up to a maximum of eighty-three different medicines, they used the water in which rare gems had been soaked, and girls born in the tiger year were suddenly being killed [for substances, such as bile, to be used as ingredients], and so the process became tainted by crime."

The Fifth Dalai Lama put a stop to all of this by offering up his treasure house -- Desi Rinpoche tells us all about this in glowing terms -- and  also went on a collecting tour, during which he received other treasures -- even some from the Emperor of China. These were used as the basis for large-scale manufacture of rinchen rilbu according to proper methods.

I want to note parenthetically, that the Fifth Dalai Lama's gem medicines achieved lasting reknown in Asia, and even occupied the attentions of Chairman Mao. Mao believed -- and he was partially correct -- that stores of these medicines were kept hidden from light, deep in the basement of the Potala. He believed that these conferred immortality. 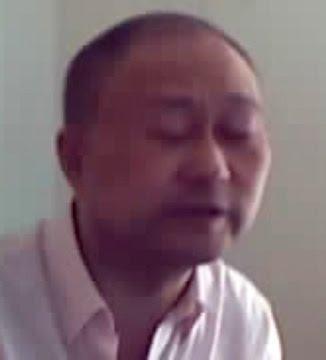 As an aside: This is my friend, "Mr. Tan," who believes he was struck blind when,
as a senior PLA officer, he "saw things he shouldn't have seen," beneath the Potala.
He is an interesting man. All of his life, he has been haunted by a dream he had when
he was a child. He dreamed that he was standing by a river, when a golden dragon
appeared with a pearl upon its head. He grasped the pearl, but fell into the river,
whereupon he awoke from the dream. He grew up and became a military officer
occupied with scientific intelligence matters. He woke up blind one morning, in
Tibet, and no doctor since has been able to tell him why. The only time he is able
to "see" anything -- and this is only brief flashes of light -- is when he takes
rinchen chagril chenmo (the "Iron Pill"), which does on a weekly basis.

When Tibet was invaded, Mao dispatched a special team to obtain these medicines -- as it happens, I personally know two members of that team, both of whom had direct access to the Chairman, and operated under his personal orders. 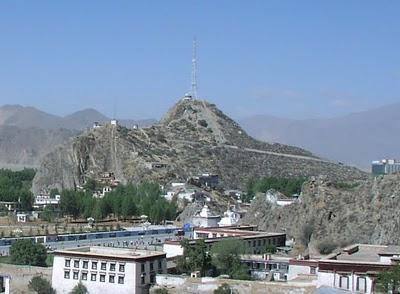 I have discussed this matter at length with them, to the extent that I am convinced they believe their account is true. They tell me that such stores were indeed kept, but they were kept in the basement of Chagpori, where they were destroyed by artillery fire, when Chagpori was shelled to rubble. What they did manage to find at the Potala was sent by personal courier directly to Chairman Mao, as a matter of very high priority. 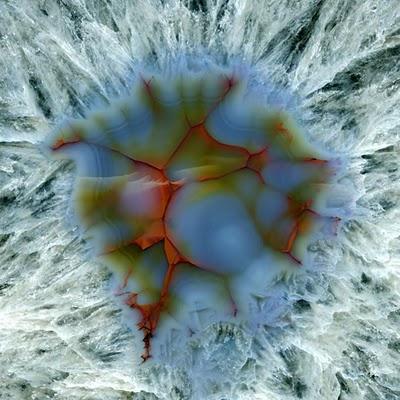 The question on every Western-educated, chronically-ill, medical skeptic's mind is, "How does this stuff work?"

Gem medicines were created by highly evolved beings, drawing upon the transcendent knowledge of Great Space: they are a gift to mankind from the mind of the Buddhas of all times and directions. I am just an ordinary person, losing my memory, so it is impossible for me to answer such questions.

However, there are three elements of information you may wish to employ to formulate your own intelligence.

First, gem medicines must be kept in the dark until ingested.

Second, scientists in Austria have discovered that gem medicines -- in essence -- turn into light once ingested. You can see an informed discussion of this in the documentary film Das Wissen vom Heilen (1996, releaszed in English as The Knowledge of Healing), including interviews with the scientists involved.

Third, chemoluminescence is quite simply "cold light," or the emission of light with limited emission of heat in result of a chemical reaction.

So, like the man says -- if I want to teach you about a square, and I tell you about three corners, you really should be able to figure out the fourth all by yourself.

As I have already reported elsewhere, I came across an old adit the other day. From the looks of the place, the miners were a little on the reckless side. Holes bored everywhere; single blasts up and out. Shoddy work with the dynamite.

So, I was just poking around when I turned over some of the larger blast fragments -- around the size of bowling balls -- and saw the strange treasure depicted in the second photo from the top, above. You can't see it very well from the photo -- I am not a skilled photographer -- but there is a universe inside.

That darker botryoidal habit you see to the right of the interior is actually a dark, ruby red.

And this is all around us, all the time.

So.... the next time you are wondering what to offer, you can just offer up all of this hidden treasure -- an offering equal to a galaxy, really. Indeed, looking at the micro-photograph of sand, with which we began this post, one is reminded of this verse from The Discourse of the Holy Doctrine of the White Lotus, as quoted by Chatral Rinpoche:

All who build a stupa of this nature to the Victorious Ones out of sand and brick or who even just pile up sand and dust to that end, who in due fashion or even as simple child's play build a refuge from suffering and even those who simply heap up sand as a support of offering to the Victorious Ones- all such persons will attain enlightenment.


Where are we, if not in buddhafields?

About the Usefulness of Iodine
About Hypothyroidism

Handbook of Traditional Tibetan Drugs: Their Nomenclature,Composition, Use and Dosage

The Dynamics of Disease-How the Ayurveds and Homeopaths perceive disease.

Chagpori Medical College for the study of Tibetan Medicine and Astrology

Any statements made on this site have not been evaluated by the FDA and are not intended to diagnose, treat or cure any disease or condition.
Always consult your professional health care provider.